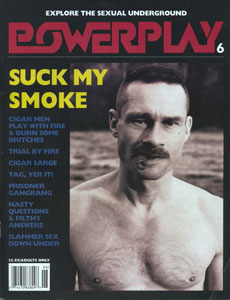 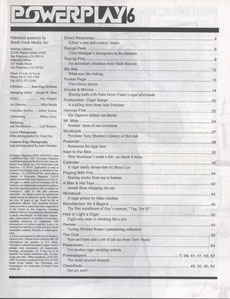 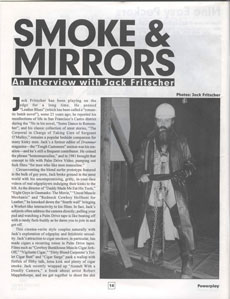 An Interview with Jack Fritscher

Jack Fritscher has been playing on the edge for a long time. He penned “Leather Blues” (which has been called “romantic butch novel”), some 23 years ago; he reported his recollections of life in San Francisco’s Castro district during the 1970's in his novel, “Some Dance to Remember”; and his classic collection of smut stories, “The Corporal in Charge of Taking Care of Captain O’Malley,” remains a popular bedside companion for many kinky men. Jack’s a former editor-in-chief of Drummer magazine–the “Tough Customers” section was his creation–and he’s still a frequent contributor. He coined the phrase “homomasculine,” and in 1981 brought that concept to life with Palm Drive Video, pumping out fuck films “for men who like men masculine.”

Circumventing the blond surfer prototype featured in the bulk of gay porn, Jack broke ground in the smut world with his uncompromising, gritty, in-your-face videos of real edge-players indulging their kinks to the hilt. As the director of “Daddy Made Me Eat His Tools,” “Eight Guys in Gasmasks: The movie,” “Uncut Muscle Mechanic,” and “Redneck Cowboy Hellbent for Leather,” he knocked down the “fourth wall” bringing a Warhol-like interactivity to his films. In fact, Jack’s subjects often address the camera directly; pulling your pud and watching a Palm Drive tape is like beating off with a randy-buddy as he dares you to join in and get off.

This cinema-verite style couples naturally with Jack’s exploration of edgeplay and fetishistic sexuality. Jack’s attraction to cigar smokers, in particular, has made cigars a recurring totem in Palm Drive tapes. Films such as “Cowboy Bunkhouse Cigar Jerk-Off,” “Vigilante Cigar,” “Dirty Blond Carpenter’s Toilet Cigar Butt” and “Cigar Sarge” pack a wallop with fistfuls of filthy talk, lotsa kink and plenty of cigar smoke. Jack recently wrapped up “Assault With a Deadly Camera,” a book about artist Robert Mapplethorpe, and we got together to shoot the shit one afternoon awhile back. It was Ash Wednesday—which Jack considers "the high holiday of cigars"—and the perfect day to light up a couple of fat maduros and talk trash.

PP: Palm Drive films don't really use the imaginary "fourth wall" technique found in most videos. Was that a conscious decision?

PP: Had you done much film making prior to creating Palm Drive?

PP: How did you make the transition from writing about sex to filming it?

Jack: It was just a natural thing for me when I came out and started having sex to start taking pictures of the people that I was having sex with. I'd always taken pictures of people before, anyway. I had my first article and photos published when I was 16. As I came out, my writing and photography came out as well. As my life turned from a kind of generic, heterosexual life to a very specific, S&M, leather, homosensual life, I found that my art was the natural expression [for it].

PP: How did you decide to film cigar smokers?

Jack: My art comes out of my personal interest and likes. I like to be around men who smoke cigars because of the tradition in my family. It's an Irish-Austrian tradition and smoking cigars was very much out of both the Hapsburg Empire in Austria, as well as out of Ireland.

PP: What's your earliest memory of a cigar smoker in your family?

Jack: My uncle was a very handsome priest and he smoked cigars, and my father and my grandfather. Nothing was better to me than riding around in the car on a Sunday afternoon in the rain with the windows rolled up and them smoking cigars and all of us having a good time... I was, like, 6 years old and it was wonderful.

PP: What went through your mind the first time you lit a cigar?

Jack: I savor everything. To fetishize this taboo and make this taboo a totem, I played with cigars for about three or four months before I ever lit one up, learning the taste. It's like learning your leather, you don't just go and buy everything that's leather, you earn it piece by piece. I tried different cigars at different sizes, playing with the different gauges of cigars. And right now, I'm getting a hard-on talking about this—cigars are a hard-on.

Jack: I think that Rudyard Kipling was right when he said that a woman is a woman, but a good cigar is a smoke. I think that really needs no explanation—it's so very Zen that even Freud could understand it.

PP: What else did you do before smoking that first cigar?

Jack: I and my playmates would play and create the otherness of ourselves in the mirror. I saw how the cigar looked in my face [in the mirror], and so I saw a context of how I related to it and how it related to me like any other sexual thing I would do, but I really connected with it. And I worked it up doing different looks. I'm very visually oriented, and I have different clothes and fetish gear I can put on, whether it's leather or camouflage, street person, construction worker or priest—you name it. Having gone through this kind of initiate of learning about cigars, my dick would be hard just from the taste of it. To taste it and then to sniff it is a lot different from then to sniff it is a lot different from lighting it and inhaling it. I would move the miring it and inhaling it. I would move the mirror to play with the point of ignition. I knew, after disciplining and teasing myself for the after disciplining and teasing myself for the complete deliciousness of it, that when I lit it up and took the first puff and inhaled it that it would be as divine as anything the gods ever breathed. I wanted that fullness, that blue-gray fullness to come into me. It fills up a manly chest. It does something to a man's face. I think there is something about a cigar that's mystical.

Jack: Cigars are to smoke, that's one thing to do with 'em—the other thing is the cigar as a weapon, the cigar as a toy. I wrote a piece some years ago called "The Five-Minute Cigar," in which a guy was tied up in an interrogation scene during a war. The men who stood around trying to get him to talk were all smoking cigars and they burned him every five minutes until he talked. And they weren't particularly interested in making him talk real fast—one cigar-burn every five minutes isn't a lot until you start letting it become cumulative. Cigars can be used in S&M, and they can be used in breath control.

PP: Like in the "Eight Guys in Gas Masks" video...

Jack: One of the gas masks had two breathing tubes on it, so I simply stuck a big cigar in one of the tubes and the guy was so excited by it, he came almost immediately without even touching himself. Another guy who is in a film called "Cigar Sarge" is such a cigar aficionado that he sometimes sends huge packages full of butts and ashes through the mail to people. He came to my place and I kept him there for a couple of days. We did a number of very interesting scenes—a cowboy scene shot in a Western location, a military scene and also one in which he is his dad's cigar boy and his hands are tied above his head and pulled up on a pulley. The camera just aims at him from the waist up and he has a huge cigar stuck in his mouth. His dad is talking to him; he's answering his dad and the one rule is he can't take the cigar out of his mouth. He has to keep smoking it on command.

PP: Palm Drive videos are real sex. How do you make that happen?

Jack: I don't try to put people into scripts. I try to find out what turns the person on; if you're into Macanudo cigars, then you've ever been in. I want to help raise the size—the intensity—of it farther than the person who is into it has ever imagined. It's not acting in our films, but ways of being. You've seen what I do to Buck Ford with two cigars in "Buck's Bunkhouse Discipline." I never seen anybody else put two cigars in somebody's mouth onscreen.

PP: That was the first Palm Drive tape I saw, and the smoke-swapping got me hard as hell...

Jack: It's like a cigar fuck, the sharing of that smoke. It is a penetration that cannot be accomplished, I don't think, in any other way that's safe. I understand how fetishes go and I understand how imagination goes. What I try to do with the videos is two things: I try to let people who are watching at home see the different ways that people get off—the different things they add into a basic jerk-off scene. So it's kind of like a little educational tape. The other thing I try to do is give a real version—a real picture–of the person who is onscreen. From start to finish, it's like peeling the layers of an onion. By the time the film is over, you an onion. By the time the film is over, you get a real idea of what this person is about.

PP: What do you think it is that attracts us to cigars?

Jack: You have to be wired differently—from your tits to your dick to your cigar in order to understand it.

PP: Cigar smoking is a very male-identified activity. That's part of the attraction...

Jack: And a cigar is a gesture. A new father will hand you one; there is not a man alive—a filling station attendant, a groom, a Marine—who won't take one. I have never, ever offered a cigar to a man who did not take it. If you want to top a straight man, and make him feel your power, offer him a cigar. You can let him off the hook and say, "You don't need to smoke it now, just save it for later." That way he doesn't have to embarrass himself if he's not used to the artistry in handling a cigar.

PP: Do you consider what you do as on-the-edge sex?

Jack: I believe, like John Rechy says, that true homosexuality is wild and outlaw. And, as all these laws are coming into place—you can't smoke anywhere—certainly cigar smoking has become outlaw. And that makes it even better, I think.